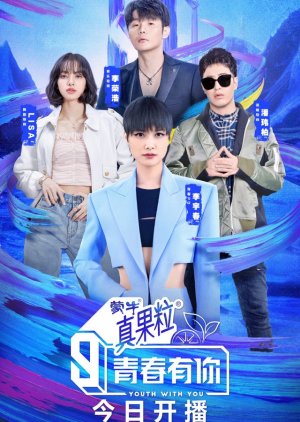 I am currently following a Chinese music group survival show called Youth With You. Youth With You has the same concept as the Produce series where the audience aka Youth Producers vote for their favourite contestants or ‘trainees’ who get to debut in a 9-pax idol group. Other than observing their talents, there are things that I learned from watching Youth With You.

Setbacks happen. What’s more important is that we get back up again

Tony Yu Jingtian is no stranger. He was a trainee in 2019’s Produce X 101. During the first evaluation, he was placed in rank ‘A’. However, he stumbled and his rank dropped to ‘F’ in the theme song evaluation. He managed to make it to the Top 20 of Produce X 101 but did not make the cut to debut under X1.

He is currently participating in Youth With You. His talent, hard work and consistency so far has paid off with him being consistently in Group A and also being one of the top 9 trainees. This makes Tony one of the living proofs that setbacks happen but what’s more important is that we get back up again. The competition is ongoing at the moment. We wish Tony all the best and may he debut after this.

During the selection process of VDR (Vocal, Dance, Rap) Position Evaluation, Krystian Wang Nan Jun wanted the song Hero Kick It. However, things don’t go as planned when Tony didn’t select him. He was instead selected for New Creature. It turned out for the better as New Creature won best Dance performance and the team won extra votes saving him from elimination.

This is similar to Jojo’s (brown and white, top with glasses) situation where he failed to secure a position in The Unknown Me (dance evaluation song) and was forced to choose Gravitation (vocal evaluation song). Thanks to his sweet demeanour and performance, he managed to be one of the Youth Producers’ fan favourites and managed to save himself from elimination.

This goes to show that just sometimes things don’t happen the way we want to but that’s okay. Why? Because something better will happen to us.

Don’t Be Afraid to Start From Zero

Liu Jun is a Malaysian dance instructor and choreographer from 1Million Dance Studio in South Korea. He was responsible for notable K-pop choreographies, namely Got7’s Lullaby. Liu Jun was also the dance producer for another survival show, We Are Young. This is why netizens are very shocked that this Seremban choreographer decided to participate in this season’s Youth With You. Some even speculated that IQIYI is trying to hire a free dance instructor. However, Liu Jun shows that we shouldn’t be afraid to start from zero in order to achieve success.

The same goes for Jiang Jingzuo from 2018’s Idol Producer and Youth With You season 1’s alum, Lian Huaiwei. Jiang Jingzuo was eliminated from Idol Producer placing at no. 61 while Lian Huaiwei didn’t make the cut to debut in UNINE after placing at no. 10 in the final evaluation. Despite having a rocky start with both of them being placed in Group C after the first evaluation, they managed to redeem themselves in later evaluation stages.

When Lisa was first announced as the dance mentor for 2020’s Youth With You, there was an air of scepticism among netizens. While they admit that Lisa is very talented in dance, they were concerned about how Lisa will interact with the trainees. Lisa is after all Thai with no known fluency in Chinese. Not to mention, the previous season was aired during the COVID-19 outbreak causing Lisa to remain in Korea. This means that she has to conduct her dance lessons via video conferencing. However, she managed to pull it off and once again, becomes the dance mentor for this season. With the COVID-19 outbreak causing people to work from home, Lisa has shown that the new norm does not impede one’s quality of work.

Countries like South Korea & China (& arguably Japan) implement the ‘idol training’ system. This is basically a rite of passage for all who want to pursue a career in the music industry in idol groups. Youth With You features idol trainees from various entertainment companies in China and individual trainees. However, not all of their journey is the same. Some of them went through different paths before participating in Youth With You:

Not everyone has the same beginning or the same ending. Everyone has a different journey that they must go through to realise their potentials. In my case, while my peers graduated law school in 2012, I graduated in 2013 which was one year after. You may end up on the same journey as your peers, maybe you don’t. Some stayed in their chosen career paths until retirement while others decide to pursue another trade. Not everything is set in stone and things happen in mysterious ways.

The Harder You Work, The Luckier You Are

“I always tell trainees there are no shortcuts, there is only practice, practice, never-ending repeated practice. Let it become a kind of habit, a routine. Because the only thing that lets me have the courage to face all the sounds and lights is just the memories of my own body.”

This may sound like a broken record but there’s a reason why ‘the harder you work, the luckier you are’ is a slogan for Youth With You. The show has proven it with examples! The first example is N rank trainees LilStar and Crayon earned rank B due to their efforts in the theme song evaluation. Another example is Neil who went from no. 85 to no. 32 in the Elimination Round earning the title ‘dark horse‘. Not to forget, BoogieFish caught everyone’s attention with his dance break during Studio Battle Evaluation.

However, the one who stood out the most is dancer Rimiko. Rimiko was forced to join the ‘You Can’t Beat Me’ (a rap song) team after not being selected for dance and vocal songs. Despite struggling, Rimiko managed to deliver a very satisfactory performance. This gave him enough confidence to take the rap part for ‘Ximen Youth‘ during the Expression Stage Evaluation.

Nemo was given the N rank before being ranked C during the theme song evaluation. This meant a lot to him because only trainees with ranks A, B and C will be able to perform the theme song on stage while only selected trainees from rank N will get a chance to perform. While most trainees wanted the A rank, Nemo’s goal was simple: he just wanted to get out of the N rank. Victory is like beauty. It’s in the eye of the beholder. While some victories are small to others, they may be big to those who achieved them. This can be seen in Nemo as he was ecstatic to place in rank C. This shows that we ought to celebrate our victories, no matter how small.

Have a Good Support System

Unlike most reality shows that focus on drama and backbiting, Youth With You features trainees supporting and helping each other. Yes, they are in competition with one another but that didn’t stop them from supporting each other. From First Stage Evaluation to Studio Battle Evaluation, there is never a short supply of trainees supporting and hyping each other up. This makes Youth With You more of a friendly competition compared to other survival reality shows. Just because life is a competition, doesn’t mean you need to be hostile about it

Don’t Forget to Have Fun

Youth With You is a competition. However, that does not stop the trainees from having fun with each other. In between evaluation stages, trainees get to spend time with each other in various activities like dance battles, fashion shows and hot pot dinners. Other than witnessing their talents, Youth With You provides an opportunity for Youth Producers to get to know their favourite trainees better and how they interact with each other. It also shows that in the midst of serious and competitive life, don’t forget to have fun.

Reality shows do not only provide entertainment, they sometimes provide some values we can apply in both our professional and personal lives. Youth With You also provides inspiring content to viewers and motivates people to work hard in achieving their goals.

Youth With You streams every Thursday and Saturday at 7 pm GMT +8 on IQIYI’s official website. International Youth Producers can now vote so please vote for your favourites on IQIYI now.

1 thought on “What I Learned From Youth With You, A Music Group Survival Show”